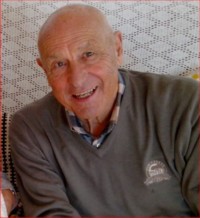 Hello, this is the Dear Lord speaking, on occasion of New Year 2009

With climate change, petroleum shock and financial collapse I thought to have given my dear humanity on earth a strong hint to change its ways. But, alas, I see all steps are being taken to resume the wrong path, without regard to future generations. So I decided to talk to you off the record.

As you know, I have been forever and shall be forever, my universe starts in unimaginable minuteness and extends to infinity, but it has been so empty that I was terribly lonely. 15 billion times your Earth has travelled around your sun since I took all my might together and compressed all energy in a tiny ball. When I let go there was a terrific blast, which you call the Big Bang. To make it interesting, I combined two contrary forms of energy, matter and anti-matter. The fight between the two lasted only minutes – luckily, matter got the upper hand; otherwise nothing would have come of it. Soon after, photons, neutrinos and quarks formed, all according to my plan. Then electrons, protons and neutrons followed, everything interconnected by mysterious powers, by attraction, radiation and oscillation.

The explosion spread in all directions and the universe began to form, containing countless galaxies with suns, planets and stars. With excitement I watched, if somewhere something like life would appear. This was to be the crowning of my experiment, because living matter could eventually become independent of myself and finally bring variety and surprise into my dull existence. According to your time count, I had to wait for ten billion years, until I noticed a sort of atmosphere around a tiny speck in the universe. The earth had cooled down, generating air and water. A sea developed, ammonites and bacteria formed – I wasn’t sure if this could be called life, but about four billion years later, I met with success: amphibia and fish populated the ocean. Looking closely, I had my first doubts when I saw how stronger creatures started to eat the weaker ones, a phenomenon I wasn’t able to stop. With you humanity, this problem reached its worst stage.

The many ups and downs of my creation, the ice ages or periods of heat, deluges or droughts, volcanic eruptions and tsunamis, they brought diversion into my life. In comparison with the dead vastnesses of sand or ice of other celestial bodies, or the atomic fusion of the stars, your earth has fulfilled my dream. How wonderful are the colours I chose for the rainbow, the blue tint of a clear sky, or autumn foliage. I could have blundered and created black snow! Many of those beautiful flowers, or feathers or scents I didn’t even invent. Their owners have adopted them in endless periods of development, to adapt to specific conditions and to gain some advantages.

My most momentous idea concerns the manner of propagation. I realised that each individual existence had to be temporary – otherwise, what would have happened to me? However, continuity had to be guaranteed, if possible with an evolution by survival of the fittest. That’s why I introduced an element of competition: two different partners should be necessary for procreation, one should be highly selective, should only accept the most suitable spouse and be responsible for the offspring. The other should be a fighter and overcome all obstacles. This developed into a true spectacle: far beyond my wildest imagination the pairs invented tricks and masquerades to achieve their aim. Unfortunately, among humanity this sex drive degenerated often into restrictions and taboos, or ugly commerce and prostitution.

Yet, without this drive, homo sapiens would have vanished long ago, because for women childbirth is painful and if children do not bring additional power to fathers, they are not interested either. Furthermore, today man has found tricks to defeat the whole system. It has reached a point, where “progressive” societies don’t grow but shrink in size. Actually, this is highly desirable, because when man appeared on the scene I made a big mistake. In the beginning I was glad to see Adam and Eve happy in paradise, but then I got bored and I made this apple deal. Everybody knows how it turned out, when I expelled them from paradise I not only prescribed they should gain their bread with the sweat of their labour, but in my wantonness I told them to procreate and subject the world for their benefit.

It took some time, but now they succeeded. The world is overpopulated, resources are plundered, a large part of them indulges in crass consumerism, without regard of the world’s bio-climatic equilibrium. They do not want to accept that the planet earth is finite and that continuous growth as a basis of their economic well being is impossible. They hardly sweat any more, power tools are everywhere. A small fraction of workers produces what is really needed for their existence. Whole armies are busy to make them spend their money on useless things, or on pleasure and entertainment.

Certainly, you made incredible advances; I hardly figure out your computers and I am getting scared of how much you are finding out about my creation. But on the inter-human level you learn nothing. To share properly sometimes happens in the family, rarely in a nation and never between nations. That’s why there are always wars.

As far as my person is concerned you came up with many, often grotesque stories. A few times I sent to you a prophet – but I never foresaw what you would make out of their messages. Some tried to live up to the challenge of goodness, but more often my pronouncements were distorted and misused. Surely, you shall never know the last truths: why do you live, what follows death – there you only may believe. After the most recent experiences I am afraid, I might have to cut you back for your own good, by sending a mega-meteorite or by volcanic action – still better than having you kill everything with your atomic bombs.

So, take heed, it is time to get your act together!

Your ever caring Dear Lord